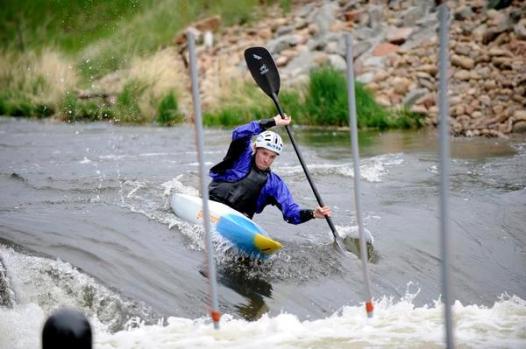 Scott Shipley paddles in the water behind his home in Lyons on a recent Monday. Shipley’s company S2O Designs created the Olympic-level whitewater course for London’s Lee Valley Whitewater Centre.

The teens gather in Scott Shipley’s garage in Lyons, grabbing kayaks and paddles before joining the three-time Olympian for a weekly kayak session on the St. Vrain River.

The water-born mentoring is yet another example of Shipley giving back to the sport that has defined his 40 years.

With four world titles and three Olympic showings, Shipley has been long considered America’s greatest slalom kayaker. But his latest contribution to paddling — almost a decade after stepping away from competition — might just eclipse his accomplishments in the boat.

From his home office in Lyons, Shipley’s S2o Design company developed the hydraulic features in the 2012 London Olympic whitewater park.

Employing cutting-edge engineering and innovative movable plastic obstacles — which he is patenting as Rapidblocs — Shipley’s design allows near-instant adjustment in the pump-powered flow, which promises to shake up the traditionally set-in-cement world of whitewater-park construction.