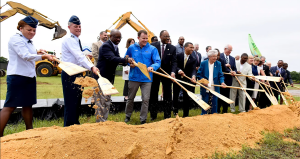 How do you turn a storm into a chamber of commerce day? Add $50 million worth of water.

Government officials, military leaders, business executives and representatives of the Poarch Band of Creek Indians exchanged smiles and hugs in a downpour Thursday as they cheered the official start of construction on a $50 million, government-backed whitewater park and outdoor center here. It’s a project that originally was announced two years ago as a complex public-private partnership, led by Montgomery County, and the expected opening was delayed as those deals shifted during the pandemic.

Those meeting in the rain Thursday praised a tenacity and spirit of collaboration in reaching the groundbreaking event. “We are Republicans and Democrats with the same vision,” Montgomery County Commission Chairman Elton Dean said. “… They care about making Montgomery… a whole better place to live in.”

The park expects to open in summer 2023 on a 120-acre site between Maxwell Air Force Base and Interstate 65. A pump-powered channel will carry kayakers along a man-made course that winds around a restaurant, shops, an amphitheater and many other amenities. Other planned attractions include a water slide zip line tower visible from the interstate, a biking trail and even a beach area with cabanas.

The city of Montgomery is donating land to the project and has worked to reach an arrangement on a new facility for the Salvation Army, which still has a shelter on the site. Mayor Steven Reed said the Salvation Army “has the final details of the contract now” and that he expects that deal to close soon. That site would not be involved in phase one of construction.

Alabama Power Vice President Leslie Sanders said the property started with 58 different land owners, and the city was able to negotiate all of those deals successfully. “There is no project of this magnitude that does not have challenges every day,” Sanders said. “… A lot of people still think it’s a whitewater amusement park. It takes explaining, and it takes perseverance.” 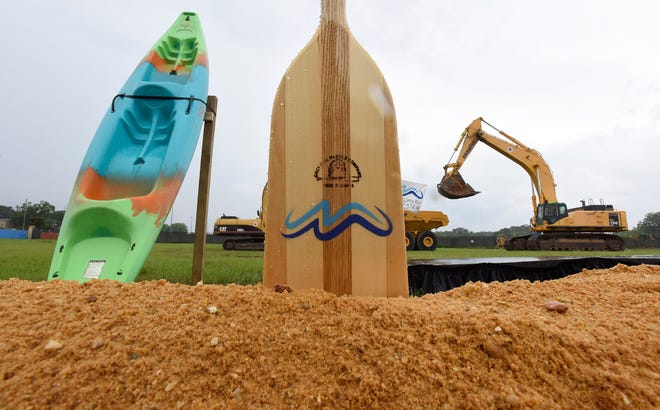 The construction work ahead is just as daunting, as is the aggressive two-year timeline.

Phase one alone includes a 310,000-square-foot channel for the whitewater course, a system to filter and manage 18 million gallons of water a year, 40,000 square feet of restaurants, retail and other buildings, and more. Senior project manager Jeffrey Gustin of Southern Whitewater Development Group said the first seven to eight months will be spent on site work and prep.

Former Olympian Scott Shipley designed the U.S. National Whitewater Center in North Carolina as well as the 2012 Olympic venue. Shipley has spent the past few months working on a scale test model of the Montgomery facility in the Czech Republic. He said it required him to get special permission from the Czech government to enter the country during the pandemic.

“This will be the most modern whitewater park in the world when it opens in 2023,” Shipley said. “We want to be able to bring international competitors here and have that Olympic standard course, but we also want to make the hurdle to getting your church groups, and your school groups, and your family and friends out on that whitewater much lower.”

Shipley said they’ll offer two channels — one Olympic standard and one for “families to explore whitewater for the first time.”

A local board called the Montgomery County Community Cooperative District was formed to oversee construction, and in April it named JESCO Inc. the general contractor for the project. JESCO also was involved in the construction of Riverwalk Stadium, the Montgomery Regional Airport and several other showpiece projects across central Alabama.